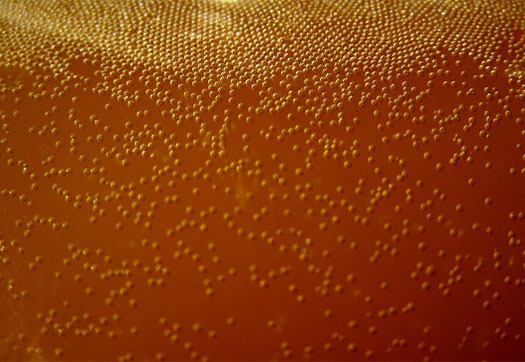 DELFT (NL) - Delft researchers have improved the anaerobic fermentation process in yeast by making use of the abundant CO2. The ethanol production rose by around 10 percent while the undesired glycerol production fell by 90 percent. They published their results in the Open Access journal Biotechnology for Biofuels.

During fermentation (the conversion of sugar into ethanol, which may be used as biofuel) normally about 4 percent of the sugars gets converted in the by-product glycerol. Which is a shame, since it reduces the ethanol production. For a long time various teams have been trying to reduce glycerol production to increase the yield of ethanol.

Glycerol is produced by yeast to cope with a surplus of the coenzyme NADH. This molecule is the reduced form of Nicotinamide adenine dinucleotide, known as the oxidator NAD+. As NAD+ takes up two electrons, it forms the complex NADH. In the synthesis of biomass and secondary fermentation products, too much NADH builds up inside the cell resulting in glycerol secretion.

The Delft biotech team, including Dr. Ton van Maris, Prof. Jack Pronk (industrial microbiology at Applied Sciences) and lead-author Victor Guadalupe-Medina, thought the already present CO2 might well be used as an electron-acceptor. This could limit the excess production of NADH and thus the output of glycerol.

The process would be even nicer if the CO2 were fixed during the process, as for instance happens in the second half of photosynthesis. Instead of using light, the yeast can use the energy from the conversion of sugar into ethanol to power the reaction. Despite the considerable differences between a photosynthetic cell and a yeast cell, the team succeeded in making what is known as the ‘Calvin cycle’ work in yeast.

The Calvin cycle (published in 1955) is the second (dark) half of photosynthesis. The Calvin cyle uses the energy from sunlight or chemical reactions to convert carbon dioxide and water into organic compounds that can be used by the organism (and by animals that feed on it). This set of reactions is also called carbon fixation.

Delft researchers found out that only four additional genes were needed to equip yeast with the biochemistry of carbon fixation. One gene called Rubisco came from a CO2-fixing bacteria, another gene (PRK) from spinach and two helper genes from E.coli bacteria. “They all work harmoniously together in a yeast cell”, says Van Maris.

Comparative lab tests between the modified strain’s performance and that of a reference yeast showed that ethanol production increased by 11 percent, while glycerol production fell by 90 percent.

Encouraged by their results, the researchers now believe that they can optimize gene expression and regulation to produce ‘DNA cassettes’ that may easily be introduced into the genomes of industrial yeast strains.

That in turn opens the perspective of carbon fixation not only in biofuel production, but also while producing other biobased materials.