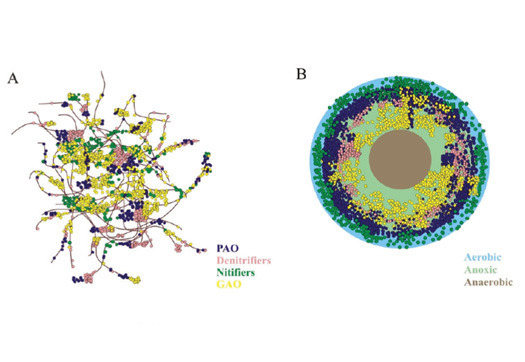 DELFT (NL) - Thanks to research by Mari Winkler, it should now be possible to integrate two successful TU Delft technologies for the treatment of waste water with bacteria, Nereda and Anammox, into a single plant. On Wednesday 5 September, Winkler was awarded her PhD at TU Delft for her work on the subject.

Nereda and Anammox are both so-called granular sludge technologies for the treatment of waste water with bacteria. Both of the successful treatment methods were jointly discovered and developed at TU Delft. With Nereda and Anammox, compact granules are formed that settle relatively quickly, which makes the treatment process much quicker, cheaper and more efficient both in general and in use of energy.
The core of the Anammox process is a group of bacteria that are capable of converting ammonium into nitrogen gas without the use of oxygen or organic carbon. In 2011, there were eleven Anammox plants in operation worldwide.
The core of the Nereda process is, just as with Anammox, a group of micro-organisms that convert waste materials into harmless substances; in this case, not only ammonium but also phosphate and organic carbon. The first full-scale Nereda plant was opened in Epe in May of this year.

PhD candidate Mari Winkler was able to make the Anammox process suitable for standard granular sludge technology, which occurs at normal water temperatures. This means that both processes, Nereda and Anammox, should now be able to be integrated.
The problem was that waste water for the Anammox process always had to be warm, owing to the fact that the Anammox bacteria only multiply slowly at low temperatures. Winkler circumvented this problem by looking at the competition in a reactor between, on the one hand, nitrite oxidised bacteria (NOB) and, on the other hand, ammonium oxidising bacteria (Anammox), at relatively low temperatures. The white granules that formed were dominated by NOB and, after settling, landed more on the upper-lying sludge bed. Red granules were localised in the lower part of the sludge bed and were dominated by Anammox bacteria.
It proved possible to remove surplus sludge selectively from the upper layer and therefore give Anammox a competitive advantage over NOBs. This also made it possible to enable a stable Anammox process at low temperatures.
Earlier this year, Winkler won the Huber Technology Prize 2012 at the most important water technology trade fair in Europe (IFAT) for her work.

Mari Winkler's PhD research was financed by the engineering company DHV and the Dutch Foundation for Applied Water Research STOWA.

Figure: Structural difference differences of A) a sludge floc and B) aerobic granule.