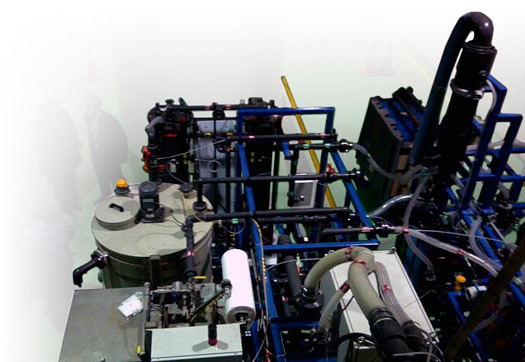 Using today's technology, bottling companies can typically use 75 to 85 percent of the water supplied to their treatment room for bottled water and the variety of soft drinks they offer. The rest is discharged as a waste stream. Using GE's AquaSel, these companies could safely treat and reuse the water to achieve 99+ percent recovery in their plants.

'Billions of gallons of usable water are lost every day because today's water treatment technologies have techno-economic limits on how much water can be treated and reused' said Heiner Markhoff, president and CEO'water and process technologies for GE Power & Water. 'GE's NTBC technology can turn billions of gallons of lost water into clean, usable water by virtually eliminating the wastewater streams in a variety of industrial and municipal treatment processes.'

GE's AquaSel allows nearly 100 percent of water reuse in bottling plants and can remove impurities at room temperature, representing a more cost-effective, less energy-intensive way to treat and reuse water. In the pilot study, the AquaSel system had a capacity of 36,000 gal/d (5.7 m3/h). In more than 1,000 hours of operation with this new process, the bottler was able to capture and convert 1.5 million gallons (5,678 m3) of what was previously considered a waste stream into water suitable for reuse with a quality equivalent to that of the incoming water to the plant. With GE's AquaSel system, the overall water recovery within the ingredient water room was increased to greater than 99 percent, which means that less than 1 percent of the influent water is now a byproduct of the new process.

Based on pilot results and the increase in the amount of water that could be treated and reused for bottling, as much as 30 million gallons per day (114,000 m3 per day) could be saved by major bottlers if GE's NTBC technology was implemented at all of their plants around the world.

Over the course of an entire year, a 30 million gallon (114,000 m3) savings translates into nearly 11 billion gallons (42 million m3) of water saved just at this bottler's facilities. That amount could supply safe drinking water for a day to more than 150 million people.

Introduced this past September, GE's NTBC technology was jointly developed by GE Power & Water and GE Global Research. The AquaSel NTBC technology underscores GE's commitment to create advanced technologies for industrial use and is based on an environmentally sustainable process that minimizes waste, chemical and energy consumption and achieves an unprecedented total cost of operation for such a high water recovery level. Specifically, AquaSel is designed to achieve greater than 99 percent water recovery in the ingredient water room, which greatly improves the water-use ratio of the production facility. AquaSel is a patented system that runs at a very high recovery on reverse osmosis reject water, producing a clean filtrate stream plus a small blowdown stream and a dry salt cake for disposal. The filtrate produced has total dissolved solids at or below the raw water and can be looped back to the front of the ingredient water system.