Home >> Turbine Flowmeters Hold Their Own in a Growing Flowmeter Market

Turbine Flowmeters Hold Their Own in a Growing Flowmeter Market 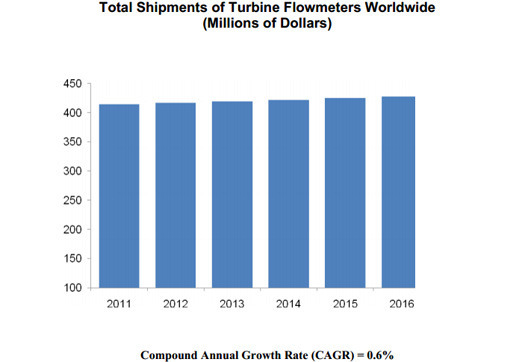 WAKEFIELD (US) – Despite competition from ultrasonic, Coriolis, and other new-technology flowmeters, turbine flowmeters remain a viable and popular choice for a variety of applications. This is one finding in a new Flow Research study, The World Market for Turbine Flowmeters, 2nd Edition. Turbine flowmeter revenues totaled $414.0 million in 2011 and are forecast to increase at a compound annual growth rate (CAGR) of 0.6 percent per year through 2016 to reach $427.5 million worldwide.

The highest growth through 2016 is expected in China, followed by slower growth in North America, Rest of Asia, Rest of World, and Europe and a decline in Japan due to the country’s economic conditions. The strong recovery and growth in market demand in general contributed to a growing turbine meter market. Continued emphasis on energy use and growth in the oil & gas sector are also contributing to the turbine meter market’s
growth.

In addition, turbine sales are being helped by new applications in oil & gas, cryogenics, ultra pure water processing, and other segments. Suppliers who support the aerospace industry are reporting an uptick in government spending for the military as well as for civilian and government aircraft flight applications.

There are many reasons why turbine flowmeters remain popular. Turbine flowmeters excel at measuring clean, steady, medium to high-speed flow of low-viscosity fluids. They offer simplicity, accuracy, and the capability of customizing solutions for various applications.

In addition, turbine meters have a significant cost advantage over Ultrasonic meters and Coriolis meters, especially in larger line sizes, although suppliers report increasing difficulty competing with Ultrasonic and Magnetic flowmeters in large line sizes. The price of turbine meters may also compare favorably to Differential Pressure (DP) flowmeters, especially in cases where one turbine meter can replace several DP meters. Users who are already familiar with turbine technology and don’t want to spend the extra money required to invest in a new technology are likely to stay with turbine meters.

According to Dr. Jesse Yoder, president of Flow Research, the gas market holds significant opportunities for suppliers:
‘Many people believe that the turbine meter market has been declining, but in fact it has been holding its own over the past 10 years. The bigger picture is that newtechnology flowmeter markets are growing at a faster rate while the turbine meter market remains fairly constant. Thus, even though the market itself is not declining, it is losing market share to faster growing markets such as Coriolis and ultrasonic. On the other hand, the large installed base of turbine meters will continue to give them staying power for the foreseeable future, especially in oil & gas. One reason the turbine market is not actually declining is that some turbine suppliers have been investigating new technology and bringing out new products that will enable them to maintain their market share over time for certain applications.’

The figure above shows total shipments of turbine flowmeters worldwide in millions of dollars from 2011 to 2016.