Home >> Revenues for Scrubbers, Adsorbers and Biofilters to Exceed $6 Billion in 2012

Revenues for Scrubbers, Adsorbers and Biofilters to Exceed $6 Billion in 2012 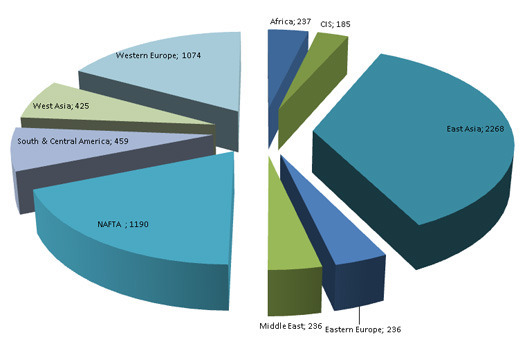 NORTHFIELD (US) – Revenues for industrial scrubbers, adsorbers, and biofilters will reach $6.3 billion next year. This total excludes a market of equal size in the power industry segment. This is the latest conclusion in the McIlvaine online service Scrubber/Adsorber/Biofilter World Markets.

East Asia will be the biggest market with NAFTA a distant second.

China is the largest producer of steel. Scrubbers are used to capture the dust emitted from basic oxygen furnaces, electric arc furnaces, sinter plants, coke ovens and other emission sources. China produces almost as much cement as the rest of the world combined. Scrubbers are now starting to be applied to cement kilns to remove hydrogen chloride, SO2 and other acid gases.

NAFTA is the next largest segment. Pulp and paper production in Canada and the U.S. is very substantial. Scrubbers are used on recovery furnaces, lime kilns and for H2S removal elsewhere in the processes. The new air toxic rules directed at the cement plants will require that scrubbers be installed at over 100 existing plants in the U.S. The total investment will approach $1 billion. Both wet and dry scrubbers will be utilized.

NAFTA is the largest purchaser of biofilters for sewage plant odor control. These biofilters are also used to capture odors from food plants.