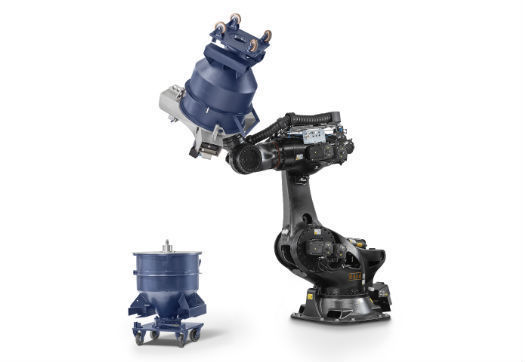 Unlike all previous machines designed for this kind of task, it imposes no idle time for cleaning in the event of a recipe switch. For each new batch, the new MTI C tec PRO changes the relevant container along with its lid carrying the pre-fitted mixing tool. This makes for a virtually continuous operation and hence, a significant increase in the number of batches completed. Moreover, the container size and mixing tool configuration are adaptable to individual requirements and can be optimized for the production volume of each given batch. The high level of automation ensures that the potential time savings are actually realized in real-life industrial operation, irrespective of the number of batches handled.

All mixing processes are performed without manual production steps. By way of preparation, weighing is performed in accordance with the given recipe and the container is placed in a central pick-up station from where the first vessel in line is then removed by the MTI C tec PRO. From this moment on, the unit executes the specific mixing process fully automatically, ultimately returning the container to a delivery point upon completion of the program. Key to this workflow, apart from the custom optimized KUKA industrial robot, is the new container lid with an integrated mixer shaft capable of accommodating diverse mixing tool configurations. The result is a fully closed system in which the mixing takes place either with the aid of a mixing tool individually predefined for the given batch or without any tooling if so preselected for the recipe.

MTI's Christian Honemeyer, managing director of the family-owned company based in Detmold/Germany, comments: "With the C tec PRO, MTI defines a new industrial standard regarding the cost efficiency and flexibility of container mixers. On existing systems, the mixing head is rigidly connected to the machine and must be manually cleaned upon every product change. The closed-system principle adopted for the MTI C tec PRO, on the other hand, supports a freely selectable combination of different mixing recipes. Thus, a changeover from black to white can be effected without any machine standstill. At the same time, the new C tec PRO blends in smoothly with the world of Industry 4.0, given that the number of degrees of freedom in the process management permits features such as, e.g., an automated adjustment to changing raw material properties.“

As different container volumes – from 100 to 600 liters – can be combined in a freely selectable manner, a single MTI C tec PRO can replace several conventional container mixers and even different machine sizes in day-to-day-operation. Production planning thus becomes vastly less complex, notwithstanding the superior capacity and flexibility achieved. And since the process is invariably carried out with the optimum fill level, the user not only benefits from a constant outstanding mixing quality but will also need fewer containers.

Mr. Honemeyer adds: "With the MTI C tec PRO, we supply a system that enables our customers to boost their productivity significantly, by a factor of three or even four. In addition, we open up ways for them to optimize their personnel situation. With conventional equipment involving much manual intervention, high fluctuation levels and a shortage of available skilled staff are often characteristic. Our new batch mixer provides a clean work environment, supports a clear reduction in staff and thus contributes to a further improvement in the cost structure of the production line."

MTI also treads new paths in financing for the C tec PRO. Instead of the one-time cost of acquisition, the company charges monthly system and service costs to the operators of the new batch mixers as part of a full-service plan. The latter includes all spare and wearing parts for a 36-month period in addition to an annual preventive maintenance plus online support provided by experts from the company's Detmold site.