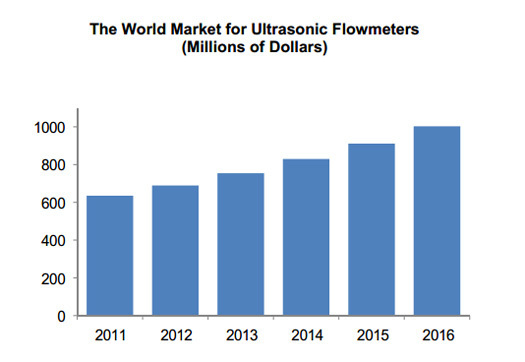 WAKEFIELD (US) - According to a recent series of studies from Flow Research, the market for ultrasonic meters totaled $632 million in 2011, and is projected to grow at a compound annual growth rate of 9.6 percent through 2016.

Growth in this market is driven by the use of ultrasonic flowmeters for custody transfer applications and the resulting product development of multipath meters. Inline ultrasonic meters account for two-thirds of revenues, with the remainder divided between clamp-on and insertion meters. In addition to gas flow, ultrasonic flowmeters are used to measure the flow of petroleum and non-petroleum liquids.

Flowmeter manufacturers are focusing a great deal of attention on ultrasonic flowmeters. Much of their research and development effort is currently going into these meters, perhaps at the expense of other meters such as vortex and turbine. Suppliers have made significant progress in enhancing the accuracy and reliability of ultrasonic flowmeters. This has mainly been done by increasing the number of paths, thereby increasing the number of measurement points, and also by adding greater diagnostic capability. The enhanced diagnostic capability can reduce the need for upstream piping, and also increases the ability of the ultrasonic meter to determine sources of error. Lately, new and more accurate meters have been developed for custody transfer of petroleum liquids as well as for custody transfer of natural gas.

The development of multipath transit time flowmeters, which use more than one ultrasonic signal or “path” in calculating flow rate, has been important for ultrasonic flowmeters. Each path requires a pair of sending and receiving transducers. By using more than one path, the flowmeter measures flow at more than one location in the flow stream, leading to greater accuracy. Multipath flowmeters have been especially important in the use of transit time meters to measure natural gas flow. In June 1998, the American Gas Association approved the use of multipath ultrasonic flowmeters for custody transfer of natural gas applications. Since that time, there has been a substantial increase in the use of these meters for natural gas measurement, especially for custody transfer.

Flow Research has released a series of three studies on the worldwide ultrasonic flowmeter market. The series is called The World Market for Ultrasonic Flowmeters, 4th Edition. One study focuses on inline meters, while the second study includes both clamp-on and insertion meters. The third study provides extensive data on the entire ultrasonic flowmeter market, including market size, forecasts, and market shares. The studies are described at http://www.flowultrasonic.com. According to Dr. Jesse Yoder, president of Flow Research, growth in the energy markets is a major factor driving growth: Natural gas is increasingly seen as a cleaner alternative to oil and petroleum liquids. It is also being seen as a long-term bridge to renewables. Ultrasonic flowmeters are ideal for pipeline applications involving custody transfer of natural gas. Here they compete with differential pressure (DP) and turbine flowmeters. However, ultrasonic meters have distinct advantages over the competition, since they have no moving parts and are extremely reliable. The need for gas flow measurement can only increase as the need for energy increases. Ultrasonic flowmeters are also widely used to measure petroleum and non-petroleum liquids.